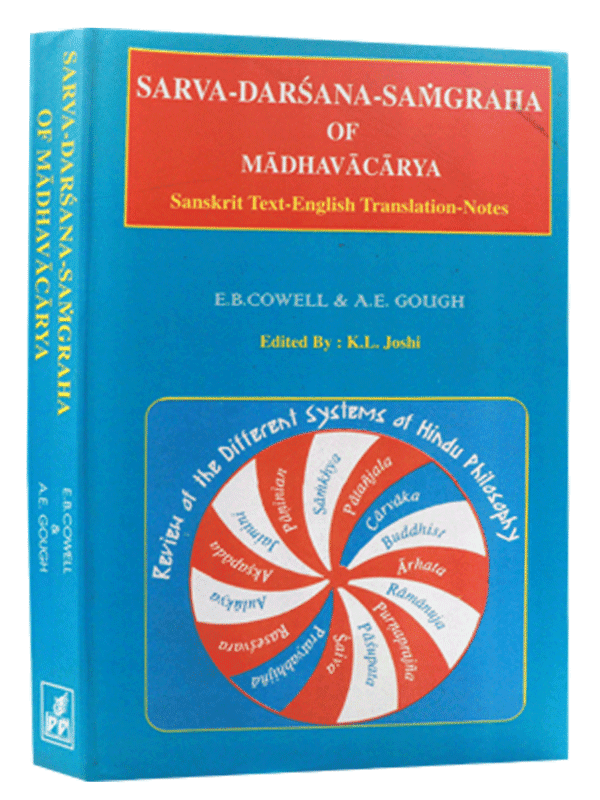 The Sarva-Dariana-Sathgraha of great Acarya Madhava (14th century) is a very interesting specimen and an unique composition in the realm of Indian philosophical thought. It contains all that which is required to know as to the fundamental principles of different systems of Hindu philosophical thought. The systems are arranged from the Vedanta point of view with all traditional discussion making use of all the logical instruments. It criticises not only the previous system but also a system which not yet been attempted.

The present edition of English translation of the Sarva-Dargana-Sariigraha includes the Sanskrit text which is very useful for European and Indian scholars too, to understand the reviews of different philosophical systems step by step in a lucid manner. The method of transliteration of Sanskrit pronounces into Roman adopted according to the modem system.

I well remember the interest excited among the learned Hindus of Calcutta by the Publication of the Sarva-dargana-Samgraha of Madhava Acharya in the Bibliotheca Indica in 1858. It was originally edited by Pandit Igvara-candra Vidyasagara but a subsequent edition, with no important alterations, was published in 1872 by Pandit Taranatha Tarkavacaspati. The work had been used by Wilson in this "Sketch of the Religious Sects of the Hindus" (first published in the Asiatic Researches, Vol. xvi, Calcutta, 1828); but it does not appear to have been ever much known in India. MS. Copies of it are very scarce; and those found in the North of India, as far as I have had an opportunity of examining them, seem to be all derived from one copy, brought originally from the South, and therefore written in the Telugu character. Certain mistakes are found in all alike, and probably arose from some illegible readings in the old Telugu original. I have noticed the same thing in Nagart copies of Madhava's Commentary on the Black Yajurveda, which are current in the North of India.

As I was at that time Oriental Secretary of the Bengal Asiatic Society, I was naturally attracted to the book; and I subsequently read it with my friend Pandit Mahegacandra Nyayaratna, the present principal of the Sanskrit College at Calcutta. I always hoped to translate it into English; but I was continually prevented by other engagements while I remained in India. Soon after my return to England, I tried to carry out my intention; but I found that several chapters, to which I had not paid the same attention as to the rest, were too difficult to be translated in England, where I could no longer enjoy the advantage of reference to my old friends the Pandits of the Sanskrit College. In despair I laid my translation aside for years, until I happened to learn that my friend, Mr. A.E. Gough, at that time a Professor in the Sanskrit College at Benares, was thinking of translating the book. I at once proposed to him that we should do it together, and he kindly consented to my proposal; and we accordingly each undertook certain chaptets of the work. He had the advantage of the help of some of the Pandits of Benares, especially of Pandit Rama Mgrs., the assistant Professor of SarhIchya, who was himself a RamAnuja, and I trust that, though we have doubtless left some things unexplained wrongly we may have been able to throw light on many of the dark sayings with which the original abounds. Our translations were originally published at intervals in the Benares Pandit between 1874 and 1878; but they have been carefully revised for their present republication.

The work itself is an interesting specimen of Hindu critical ability. The author successively passes in review the sixteen philosophical systems current in the fourteenth century in the South of India, and gives what appeared to him to be their most important tenets, and the principal arguments by which their followers endeavoured to maintain them; and he often displays some quaint humour as he throws himself for the time into the position of their advocate, and holds, as it were, a temporary brief in behalf of opinions entirely at variance with his own.I We may sometimes differ from him in his judgement of the relative importance of their doctrines, but it is always interesting to see the point of view of an acute natie critic. In the course of his sketches he frequently explains at some length obscure details in the different systems; and I can hardly imagine a better guide for the European reader who wishes to study any one of these Darganas in its native authorities.